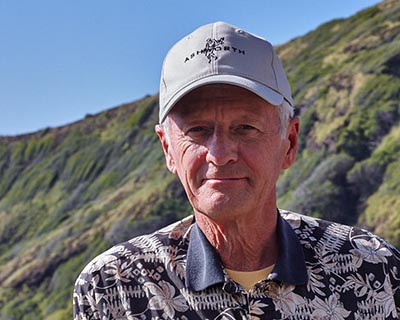 I simply enjoy photography. I’ve been around cameras off and on for more than five decades. I once dreamed of making photography a career when I was in my early twenties. I lived in Carmel, California, and briefly attended photography school in Santa Barbara. Then, life interrupted my photographic ambitions. There was a war on, so I finished a degree in political science at the University of California Santa Barbara, and enlisted in the Navy during the Vietnam era. I became an intelligence officer serving primarily in the Philippines, and ultimately returned to the Monterey Peninsula following my discharge.

Photography then became a typical vacation pastime…but always in the back of my mind it was much more. Fast-forward to now, after a career in computers, technical writing, marketing, web development, and finally retirement in Scottsdale, Arizona. It’s time once again to renew my interest in photography.

I hope you’ll enjoy viewing some of my photographs, and if so, please use the Contact page or the Comments section of my blog to share your thoughts.

During my years on the Monterey Peninsula I became intrigued with Cannery Row…both the physical street of abandoned sardine canneries and with the book written by John Steinbeck. I wrote A History of Steinbeck’s Cannery Row which explored the history of the street, the mysterious disappearance of the sardines, and the history of many of the real-life characters who Steinbeck fictionalized.

While researching that book, I ran across a name completely unrelated to Cannery Row or Steinbeck…Henry Ossian Flipper. Intrigued by just the uniqueness of the name, I soon discovered he was the first black graduate of West Point in 1877. I was hooked and wound up spending years researching his life and times to write Henry Ossian Flipper: First Among Equals.