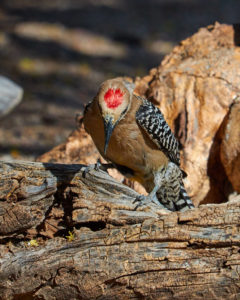 Many of the holes you see in the Saguaro cacti throughout the Greater Pinnacle Peak area are active or former nest entrances of the Gila Woodpecker. The male has a distinctive bright red patch on its head while the female’s head is a beautiful tan/brown color. Both males and females have black and white backs and their undersides are generally tan/brown in color.

The birds eat seeds, insects, fruit and even an occasional small lizard. They can be seen ratta-tatting their beaks into tree trunks hunting for food. When the Saguaros are blooming, they’re first in line to dip their beaks into the sweet, yellowish centers of the white flowers. And, in what’s considered to be a territorial declaration, their loud pecking can sometimes be heard as they fitfully attack a rooftop satellite dish or metal chimney covering.

Although not officially endangered, the Gila Woodpeckers continue to lose much of their habitat to human development. According to the North American Breeding Bird Survey, Gila Woodpecker populations have declined by about 49% between 1966 and 2014.

Click on any of the photographs below to display larger images.

This entry was posted in Birds, Wildlife.