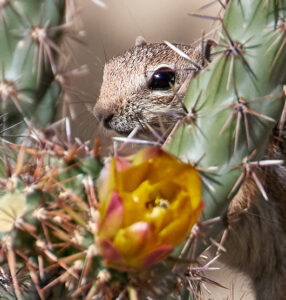 One of the cutest denizens of the Sonoran Desert area is the Harris’s Antelope Squirrel. These tiny little critters dart around the desert floor in search of bugs and seeds, or scamper directly up a spiny cactus looking for tasty flower buds.

They were given their name by John James Audubon in recognition of 19th century philanthropist Edward Harris who helped fund some of Audubon’s expeditions. Audubon extended a similar tribute by naming the Harris’s Hawk after his patron.

With a body about the size of a plump hot dog, these squirrels can be found in Arizona, New Mexico and north western Mexico. One of their most interesting characteristics is referred to as “heat dumping.” In the heat of the day, they will frequently seek shade under a bush or tree and spread-eagle themselves in the cooler dirt to cool their bodies. They also raise their fluffy tails over their backs to provide shade by acting as an umbrella.

Although not an endangered species, Harris’s Antelope Squirrels are subject to a host of predators such as coyotes, hawks, snakes, bobcats, and of course, humans in their seemingly endless quest to pave over natural habitats.

Click on the thumbnail photos below to cycle through larger images.

This entry was posted in Wildlife.