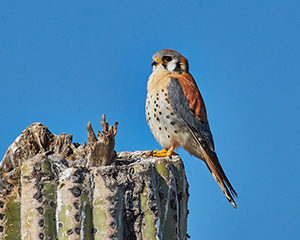 American Kestrels can be found throughout much of the United States including nearly all of Arizona. Although common, they are so small that they may be hard to identify. They’re about the size of a common Mourning Dove, although their coloring is brown and tan rather than the gray coloring of doves. The smallest member of the falcon family, American Kestrels are fast fliers and feed on small prey such as lizards and various insects.

I was fortunate this spring in finding a breeding pair of Kestrels about a mile away from my home. They were very skittish, but allowed me to capture a couple of their mating encounters as well as some feeding photographs. The male Kestrel (the one with the black dots on its chest as shown in the photo above) appeared to have an injured talon, but managed to fly and hunt despite the disability. Unfortunately, I was never able to locate their nest…maybe next year.

Click on any of the thumbnails below to display larger versions.

This entry was posted in Birds.