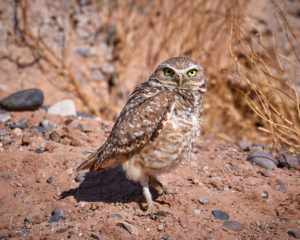 I’ll bet that the first time you see a Burrowing Owl, you’ll smile. These small owls with big yellow eyes seem to look directly into your soul. Unlike most other owls, Burrowing Owls – as their name implies – make their homes in the ground in abandoned burrows that have been dug by other animals such as prairie dogs.

Their habitat includes much of the western United States, parts of Canada and most of Mexico. Arizona has a healthy sprinkling of Burrowing Owls throughout most of the state. In Arizona, they are listed as a “Species of Concern” according to the Burrowing Owl Conservation Network. Perhaps the biggest concern is the encroachment of human development and many local, state and federal organizations have been formed to protect their habitat.

“Howdy Birds,” according to cowboy lore are what western wranglers used to call the owls because of their amiable nature and the slight nod they’d seem to offer as a greeting. They are patient with humans in most cases yet tend to stay alert for any sudden move they view as a threat. They also keep a wary eye on the skies above in case of an intruding predator such as a hawk or other bird of prey is near.

They are not easy to spot in their desert habitat because of their small size and brownish coloration. However, they are active during the day as well as during the night. Their daytime visibility makes photographing them somewhat easier, but still a challenge. Here are a few photographs I’ve taken of Burrowing Owl. I hope you enjoy them and just try not to smile!

Click on any of the thumbnail images to enlarge and go through the larger versions.

.
This entry was posted in Birds, Wildlife.