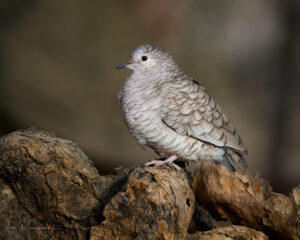 Unless you look carefully, you may never know you’ve seen an Inca Dove even though they are relatively common throughout the Sonoran Desert. At first glance, they look much like the more common Mourning Dove. But, these little desert delights are especially distinctive from other similar dove species.

In a word, they’re endearing. Their diminutive size, unusual feather pattern and partnering behavior make them a treat for birders and photographers, if you can find them. Although much smaller than their cousins the Mourning Dove, they share that bird’s general gray coloring. However, the Inca Dove’s feathers are layered much like fish scales or shingles on a roof and each feather has shaded gray tones ending in a dark gray tip. They lead a monogamous lifestyle (sometimes in a life-long relationship), and you will usually find them close to their significant other softly cooing and bowing to show their affection.

Inca Doves love the Sonoran Desert’s hot climate and don’t feel comfortable in colder temperatures. During desert cold spells or chilly mornings, an Inca Dove twosome will huddle close together with their mate to conserve their body heat. In fact, if the doves are part of a larger group, they will cluster together in a tiered pyramid formation with as many as twelve birds stacked one on top of another.

Click on the thumbnail photos below to cycle through and view the captioned larger images.

This entry was posted in Birds, Wildlife.